In the beginning, the ancient Mesopotamians used sun dried bricks made from mud for construction. Their bricks kept crumbling. When something crumbled, they rebuilt it. There were no architects, no engineers, no special craftsmen for building purposes. The scribes directed the workers. That did not always work well. But what they built, in spite of their lack of strong building materials, was impressive and beautiful. The Assyrians starting using rocks in their construction, especially fortified construction to protect the people. That helped.

In spite of their lack of strong building materials, the Mesopotamians are credited with the invention of urban planning, courtyard houses, and ziggurats.

Temples: In the center of each town, was the Ziggurat.  The Ziggurat was a temple.  The ancient Sumerians, believed their gods lived in the sky.  In order for the gods to hear better, you needed to get closer to them.  Ziggurats were huge, with built in steps. Ziggurats had a wide base that narrowed to a flat top. When the Babylonians took over in the south, and the Assyrians in the north, ziggurats continued to be built and used in the same manner as they were in ancient Sumer.

Landscape Architecture: They also did a wonderful job with landscape architecture. Legend says that The Hanging Gardens of Babylon were built in ancient Babylon around 600 BCE by King Nebuchadnezzar, by raising soil from the Euphrates River using pumps. Pumps also watered the plants, allowing the gardens a source of constant fresh water to keep things green and growing. If true, this was an engineering marvel for the times. But then, King Nebuchadnezzar was very clever. He built most of ancient Babylon, which was an incredibly impressive city. Some historians believe the gardens were built in a series of platforms that all together were 320 feet high. The Gardens had paths and steps and fountains and gorgeous flowers, all build to make a homesick queen feel welcomed and loved. Legend says as you approached ancient Babylon, the gardens could be seen for miles around, soaring up into the sky. No one knows if the gardens actually existed, but the legend is a lovely one. If the gardens did exist, they would have been an incredible sight whether you approached the city by water or by land across the harsh deserts that protected the city to the west and south. The thought of the lush green gardens was so lovely in fact that the romantic ancient Greeks, with their enjoyment of legend and romance, selected the Hanging Gardens of Babylon as one of the 7 wonders of the world. (Today we say one of the 7 wonders of the ancient world.)

Impressive Cities: The ancient Mesopotamians also built impressive entryways into their cities to honor their gods, but also to impress visitors. 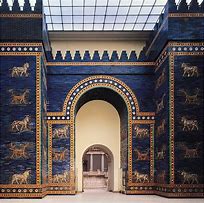 The Ishtar Gate: One of the most impressive sites was the avenue that led into the city of Babylon. The picture above is a reconstruction of the gate. This avenue was called Procession Street (or Procession Avenue.) Huge pacing brick animals were positioned along both sides of the avenue as decoration. The avenue passed under the elaborate Ishtar Gate, the 8th gate to the walled city. It was built around 575 BCE by King Nebuchadnezzar II. The walls were glazed brick in cream and blue and brown colors, with designs animals and gods, in honor of Marduk. It was built to honor Marduk, but also to impress visitors. 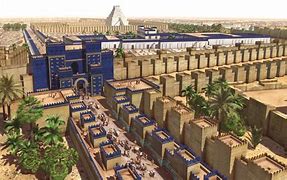 Homes: Thousands of years ago, in the cities of ancient Mesopotamia, whether they were rich or poor, every family had their own house built mostly of sun dried bricks. All houses were at least three stories high. The homes of the rich were often higher. The first floor was an entryway and courtyard.  Children played here, small livestock was kept here, and if the weather made it possible, meals might be cooked here. The next two floors was where the family lived. Their sleeping and sitting rooms were on these two levels as well as food storage.  The roof of the house was flat.  The people treated the roof as another floor. During good weather, people would cook and eat on the roof of the house. This got everyone up away from the streets, yet still out in the open air.

The Land Between Two Rivers - The First Civilization

What does it take for a group of people to become a civilization?

The importance of geography in Ancient Mesopotamia

Music and Instruments (hear it!)

The Legend of Gilgamesh (the first superhero!)

Gilgamesh and the Tree of Eternal Life

More Myths and Stories (some interactive, some animated)

Royal Tombs of Ur

So Many Firsts - the Wheel, the Sailboat, the Plow, and more

Interactive Quizzes with Answers about Ancient Sumer, Babylon, and Assyria