The art and craftsmanship of the Sumerians was a thing to behold.  They worked in gold and lapis as well as clay and wood.  They made intricate chairs from wood and reeds.  They made musical instruments. The thing that they did best was pottery.  Their pottery was so good that they used it as a money system, trading pottery for food and other items. Archaeologists have found partial remains of some of their mosaics, which appear to be portraits of animals and people, as well as geometric patterns. They made beautiful jewelry from gold and lapis. 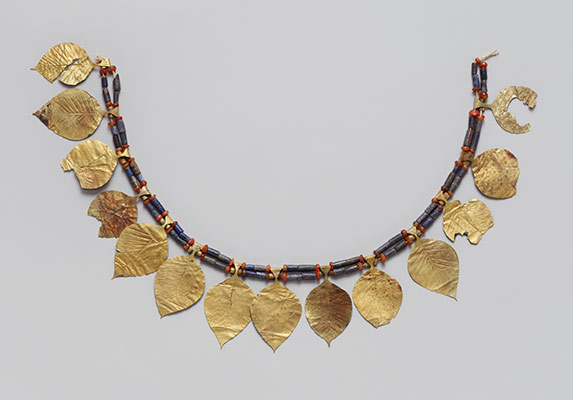 The Babylonians were the next great Mesopotamia civilization.  They built on top of the remains of some of the cities of Sumer.  They too worked in gold, lapis, wood and clay.  They too made jewelry, musical instruments, small statues, intricate chairs, weapons, and mosaics.  They continued the art of pottery.  To the arts and crafts of the Sumerians, they add massive sculpture, which they created to represent and honor their gods. The Babylonians are also credited with making the first colored egg shells!

Another great Mesopotamian civilization, The Assyrians, lived to the north of the Babylonians. They did not create the small statues and objects of art as the Sumerians and the Babylonian people did.  They created murals and paintings that showed them fighting or hunting.  Their murals showed how the royalty lived.  We can tell a lot about their daily life from the activities shown in these paintings and murals.

Art - The Royal Standard of Ur - tells us a lot about daily life and inventions like the wheel, the cart, the helmet!

Art - Tells us about ancient Mesopotamian weapons and clothing

The Land Between Two Rivers - The First Civilization

What does it take for a group of people to become a civilization?

The importance of geography in Ancient Mesopotamia

Music and Instruments (hear it!)

The Legend of Gilgamesh (the first superhero!)

Gilgamesh and the Tree of Eternal Life

More Myths and Stories (some interactive, some animated)

Royal Tombs of Ur

So Many Firsts - the Wheel, the Sailboat, the Plow, and more

Interactive Quizzes with Answers about Ancient Sumer, Babylon, and Assyria